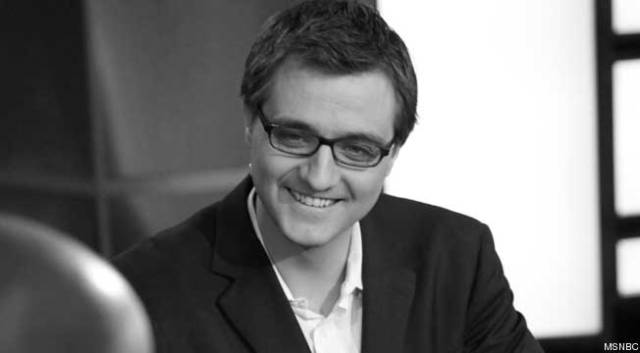 In the past few days, GE/Comcast liberal Chris Hayes has done a couple of laudable things:

1. Devoted a lengthy segment of his show, Up With Chris, to a uniquely informative, well-moderated discussion of the situation in Gaza.  Hayes’ panel – which included a Palestinian and a Palestinian-American –  had 75% fewer assholes than is normal for discussions of this kind.

2. In an otherwise empty and pointless discussion of drone policy with his empty and pointless colleague, Melissa Harris-Perry, Hayes remarked upon the official lack of accounting for the murder-by-drone of 16-year-old Abdulrahman al-Aulaqi. He also concisely illuminated the differences and similarities between young Al-Aulaqi and  ‘a kid in the Bronx…killed by the NYPD’  when Harris-Perry invoked the callous, fallacious ‘what about dead African American kids?’ trope.

Weighed against what is widely available online from independent and foreign sources, nothing in the above is particularly remarkable, especially when you closely inspect Hayes’ remarks in the segments. But since Hayes works for an American cable news network, his double whammy of genuine probity made something of a splash.

Investigative advocacy journalist, Jeremy Scahill, who is both Hayes’ friend and a sometime guest on his program tweeted –

Because of the bankrupt state of US corporate media, what [Chris Hayes] does is a remarkable public service.

I thought this was a bit excessive and tweeted as much. ‘Bullshit’, specifically. I added that I thought Hayes’ good works had to be considered against a number of bad ones. Scahill, who is creditably very accessible to his Twitter followers, took the matter up with a certain amount of irritation. ‘You can be very reactionary’ he wrote. Various annoyingly splainy people weighed in for close to an hour, to the effect that Hayes was as good as it gets on cable news and that I was, therefore,  a ‘preening’, purist ingrate or at the very least, ‘misplacing blame’.

The first part of this verdict is true. Hayes is as intelligent and as far left as prominent mainstream commentators get. By way of articles for The Nation, where he is an Editor at large, and his recent book Twilight of the Elites, he has been an articulate observer of American meritocracy and the extent to which an increasingly corrupt, unaccountable elite is wreaking havoc.

That’s all fine, but there’s a catch, which Freddie DeBoer beautifully described in a New Inquiry review of  Twilight:

Hayes looks out at a burning house and with true moral conviction and unsparing vision, describes it. He then proposes solutions that amount to washing the windows while the building is engulfed in flames…his prescriptions for solving the massive problems he identifies in the book are the typical incrementalism that has constrained the American left for over 30 years.

Regular readers of this blog will know instantly that what DeBoer is describing here is what I call ‘heat vampire’ liberalism. Rather than quote myself again on what that is, I’ll borrow a nicely concise phrase DeBoer uses for Hayes: “all Karl Marx in description, all Tom Daschle in prescription.”

Though DeBoer sees this counterintuitive duality everywhere in liberalism, he is less skeptical than I am on where it originates, crediting it to ‘spectres’ of failed radicalism haunting liberals who ‘forever fear a new Reagan revolution.’  With apparently little interest in how the patronage of outfits like GE, Comcast and big advertisers might shape liberal conventions, DeBoer is unsurprisingly more sanguine about their merits: “That [Hayes] has a nationally televised news show is something of a miracle, in the best sense” he writes.

Well, sorry, there are no miracles on cable news networks co-owned by defense contractors and cable monopolists; there aren’t even happy accidents. This should be obvious — especially when you factor in MSNBC’s frequent capitulation and firing rituals — so it’s depressing to have to argue otherwise. Somehow lefts that would, on a rainy day,  apply the Chomsky/Herman lens to a bag of Doritos are incapable of applying it to establishment lefts at the margins, even when these people are on commercial television. Understandable, really,  since I don’t think Chomsky gets how Chomsky applies to Chomsky either.

Let me spell it out: Someone in some high place finds Hayes useful.  If and when he’s no longer useful, he’ll be purged.  There was a very public reminder to this effect in May when, on a Memorial Day program, Hayes expressed ambivalence about the word “hero”, because it is “so rhetorically proximate to justifications for more war.” Even though Hayes offered this tepid remark in a segment rich with militarist schmaltz, right wing pundits and veterans groups pounced. The next day, Hayes issued a revolting apology which went above and beyond the normal requirements of atonement, complete with the far right-wing suggestion that civilians can’t really speak with authority on military matters:

…in seeking to discuss the civilian-military divide and the social distance between those who fight and those who don’t, I ended up reinforcing it, conforming to a stereotype of a removed pundit whose views are not anchored in the very real and very wrenching experience of this long decade of war. And for that I am truly sorry.

Public capitulation rituals of this kind aren’t just a part of  heat vampire liberalism;  they are, in fact,  its very essence.  This is basically what DeBoer’s Marx/Daschle formulation describes: a clear eyed, even radical, assessment of all that’s wrong in the world coexisting with acquiescence in oligarch-approved methods for putting things right, no matter how often and resoundingly these methods fail.  So constituted, heat vampire liberals act as role models for the rest of us, reconciling things that aren’t logically reconcilable,  successfully wrestling themselves into compliance with status quo fundamentals while bemoaning the particulars.

Taking parts one and two of the Hayes ‘heroes’ dust-up at face value, one sees him publicly reconciling a skepticism toward militarist manipulation of language with cringing deference toward military authority. For those reading between the lines, not least other careerists, Hayes is also helpfully demarcating the boundaries of permissible skepticism. It’s certainly easy to see how useful this ritual is to GE, the military contractor footing half the Hayes bill. It’s somewhat harder to suss out what it usefully contributes to anyone else.

This is why I part company with Hayes’ many admirers and why I consider most  establishment lefts fundamentally toxic: their principled, analytical moments are inseparable from the ways in which they more frequently and potently subvert them.  Nowhere is this more dramatically evident than in the crucial role heat vampires like Hayes play in presidential elections, which is where they really shine.

It is impossible to overestimate the importance of presidential elections, not, certainly, to policy-making and social progress — where they are, in aggregate terms, largely irrelevant — but to mass indoctrination, mass distraction, and movement killing, where they accomplish a great deal.  A full-throated bullshit call on these long, costly, and destructive spectacles is clearly warranted but obviously not something the ruling class would be wise to entertain.

Hence, the price all widely known public lefts from Rachel Maddow to Chomsky must pay to sit at the grownups’ table is agreement that a quadrennial, unconditional allegiance to whomever happens to be the Democratic presidential candidate is both tactically sound and socially responsible. Nothing attests quite as strongly to how homogenous and well-disciplined is the U.S. establishment left than the consensus on this profoundly non-obvious point, despite wide dissensus in the public at large.

As each successive edition of  The Most Important Election Ever™ provides fewer reasons than the last for even the most anguished liberal/left participation, heat vampires, as exemplars of irrational compliance, are ever more critical to converting the increasing number of ambivalent, wary shoppers into sales. Compelled this time around to argue for the reelection of the disastrous Obama, heat vampires obligingly offered embarrassingly clownish levels of irrationality, bullying and outright lying. My personal favorite is Daniel Ellsberg’s Impeach Obama/Re-Elect Obama two-step.

This stuff isn’t easy, so Hayes must have felt lucky to be among a few who actually got talking points straight from Obama himself, via a strategy meeting at the White House last December. As reported by Jake Tapper –

An all-star list of progressive and liberal media folks came to the White House today to chat with President Obama over coffee in the Roosevelt Room.

The group chatted with the president about economic messaging, his agenda for 2012, the various campaign arguments against different GOP candidates, the desire among some Democrats for him to highlight his foreign policy accomplishments, fighting corporate influence and the “crappiness” of the Senate filibuster , as one attendee put it.

Armed with the Kill List President’s ‘various campaign arguments’, Hayes obligingly leveraged his bestselling credibility on elites toward the quaint campaign theme that there was only one deeply corrupt, above-the-law elite running, even though his book clearly shows he knows better.  The cynical marriage of Hayes’ yappy valedictorian earnestness with this glaringly dishonest proposition is as funny as it sounds and I strongly recommend you see for yourself, as this transcript – remarkable though it is – doesn’t do it justice:

Hayes:  I thought the moment of the oil drilling gaffe, that debate to me was a key moment. The reason was this. Mitt Romney asked the president a direct question numerous times, kept interrupting him, “Isn’t it true? Isn’t it true? Didn’t it go down?” Now the rules for the debate, that we all got leaked, number five, subsection E: “The candidates may not ask each other direct questions during any of the four debates.”

Now, at a certain level, who cares, right? Who cares? Here’s why I care. The theme of the last ten years of this country is the people at the top have felt the rules don’t apply to them. And you send your people to sit down and negotiate a set of rules, and 20 minutes into it you throw it out the window. And everything we’ve seen, from the financial crisis to everything else that’s happened in this country, has been about the oligarchs and the ruling class and the people at the top feeling that they are not a party to the social contract. So some stupid little contract that was negotiated by your people, you don’t worry about.

Rachel Maddow: And you think Romney threw out that rule before Obama…I mean both of them broke the rule…

What can you say about an esteemed commentator on havoc-wreaking elites, who   tweezes out the extremely consequential difference between the candidate who breaks a debate rule first and the one who breaks it second? Who passionately laments the corruption of the past ten years,  helpfully putting aside distracting trifles like the four out of ten years in which Obama was president and not a single Bush crime was addressed, not a single bankster went to jail and all Americans became potential targets of assassination?

What can you say? It’s a remarkable public service! Nay, it’s something of a miracle!

Keepers of the Gatekeepers

The Fraudulent Dissent of Lawrence  O’Donnell

98 Responses to The Cable News Heroism of Chris Hayes (@chrislhayes)