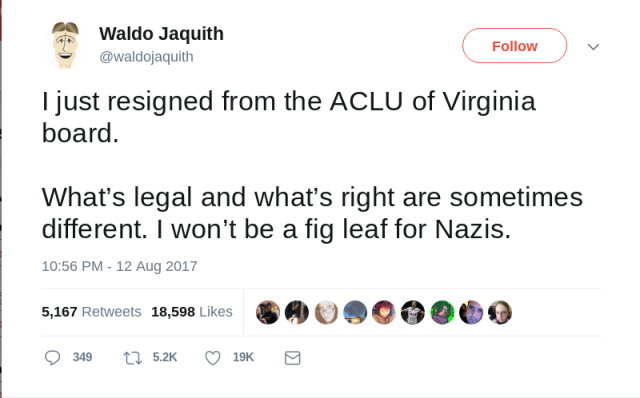 As the resignation of an ACLU Virginia board member attests, the horrific violence in Charlottesville has provoked long-overdue tactical thinking on defending the First Amendment rights of people who want to kill you.

Charlottesville put the ACLU in the hot seat because its Virginia chapter took Unite The Right’s side in a permit dispute with the city. The city said it would only issue a permit for McIntire Park, a large green space at some distance from the town center, citing safety concerns. The Virginia chapter of the ACLU, along with the libertarian Rutherford Institute, insisted this was a violation of the participants’ First Amendment rights. A federal judge agreed and ordered the city to issue a permit for Emancipation Park, a comparatively small town square surrounded on all sides by busy streets.

There is, of course,  no question now that the city’s safety concerns were fully warranted, as the location of the gathering in a crowded, downtown area is inseparable from both the presence and lethality of the car a white supremacist used to kill one counter-protester and injure many others. We can’t know how things would have panned out in McIntire Park, especially since we can’t know for sure whether or not Unite the Right would have obeyed the city’s order to congregate there.  However, Unite The Right’s organizers clearly felt that getting the permit for the smaller park was in their interest which means, as any dumbass could certainly infer, it’s probably not in anyone’s else’s. That state GOP lawmakers have been pushing bills to shield drivers that hit protesters makes the point especially clear.

But no! It is in our interest! Slippery slopes! Precedent! Brandenberg! We’ve heard the drill so many times and in case we hadn’t, lifelong fascist groupie Glenn Greenwald was on hand at The Intercept to fill us in.  Naturally, Greenwald didn’t depart from the usual schtick of eliding concrete, qualitative differences between white supremacy and actual discourse, maligning the ACLU’s critics as authoritarians and hypocrites, and insisting without a shred of hard evidence that a First Amendment victory for a nazi that will smash you with a car is a victory for us all.

I’ll fight the temptation to digress at length on why Greenwald is such a fitting defender of the ACLU during this blood-soaked moment. Greenwald’s interesting career — particularly his five-year stint as legal counsel to racist shooting spree inciter Matthew Hale — beautifully illustrates just how fine the line between First Amendment absolutist and actual fucking fascist really is. But I’ll confine myself to the present moment, and say that in the best of times, absolutist doctrine like what Greenwald routinely excretes is ahistoric, infantile, right-wing and pernicious, as I exhaustively illustrated here.

To trot this bullshit out now, taking no meaningful account of the present political terrain nor the specifics of a case in which a woman was murdered is simply despicable. That the ACLU has mostly outsourced the excuse-making to people like Greenwald, while it ostentatiously denounces the nazis to whom it provides material support, makes this whole spectacle particularly disgusting. In the wake of so much carnage, the ACLU owes the public a thorough explanation regarding its Virginia chapter’s involvement in the Charlottesville case. Specifically, it should answer the following questions which, tellingly and predictably, no representative of the ACLU has, to my knowledge, addressed:

1. The perennial justification for legal aid to fascists is that precedents set in cases against them will invariably be used against other groups. Given that Charlottesville simply wanted to move the protest, and that there is already precedent to support this — see First Amendment Zones, for example — what was the tactical basis for supporting Unite The Right in this case?

2. When announcing that the city would only permit the demonstration if it were moved to McIntire Park, Charlottesville police chief Al Thomas said:

Having the demonstration at McIntire Park is safer because the park is large enough to accommodate the size of the anticipated crowd. It also avoids a situation whereby overflow crowds spill into the streets, as would likely occur at Emancipation Park.

This is just part of the city’s rationale for moving the rally, which all by itself seems sufficient to warrant the move. Given what actually happened, it seems downright prescient.

Since domination through violence is the essence of white supremacist ideology, and that violence at their gatherings has been escalating in the past year, and that commenters on nazi websites like The Daily Stormer were promising violence days ahead of the rally, why did you threaten to sue the city within 24 hours if its officials could not “explain in more than just generalities its reasons for concluding that the demonstration cannot safely be held in Emancipation Park.” What rationale could they have provided that would have satisfied you?

3. Given that Unite The Right already had legal assistance from The Rutherford Institute, a conservative civil liberties group, and the nazi attorney Kyle Bristow, why did the ACLU become involved at all? Since the ACLU doesn’t take on all First Amendment-related cases, shouldn’t client need govern decisions as to where ACLU deploys its finite resources? If need doesn’t govern these decisions, what does? Can you list the other cases in which you’ve been involved recently that didn’t directly benefit violent white supremacists?

4.  Since there is little evidence that public safety factors into your tactical considerations at all, the demand that you answer the questions this case raises — or face a boycott — seems beyond reasonable. Given that your response to critics — when you respond at all — has been to blame the police that warned against the use of Emancipation Park in the first place and to belittle detractors as authoritarians and in-fighters, why should any anti-fascist concerned with their safety and that of their friends continue to support either the ACLU’s Virginia chapter, or the national organization that has also declined to meaningfully address this case?

5. In light of the violence in Charlottesville, and the increased likelihood of violence at other neo-nazi rallies, will the ACLU continue to intervene against cities that attempt to thwart or regulate these events?

As my regular readers know, I think first amendment absolutism aids and abets fascist violence generally. Therefore, making too much of the ACLU’s culpability in this case risks minimizing their culpability on a broader scale.  Nonetheless, I think seeing how the ACLU responds, or doesn’t, to a threatened boycott, will provide newcomers with an opportunity to see how disingenuously the ACLU operates in real time. It’s certainly far past time to demand specific rationales from the ACLU that take account both of how toxic and dangerous neo-nazis are, and how, historically, First Amendment absolutism has favored reactionaries in relation to militants on the Left, particularly Black militants. The usual platitudes about slippery slopes require evidence.

Ideally, I would like people to consider the possibility that First Amendment absolutism is a means by which finance capital can keep fascism and white supremacy on life support, right out in the open, so that fascist groupings, in accordance with their history, can act as paramilitaries for the ruling class in times of crisis.  I reject the idea gaining purchase among the most shallow antifa factions that the vermin who descended on Charlottesville represent the country’s dark heart. It is no elision of this country’s genocidal history, or its systemic racism in the present, to accurately observe that these pernicious living caricatures are far fewer in number than people actively opposing them in myriad ways right now. Noting their uncanny resemblance to US-supported fascists in Ukraine and Venezuela also does not minimize the organic element that this “movement” taps into. The point is that this type of classic fascism is on the way down and we should hasten its death.

Legitimizing it as a mere collection of “bad views” with any fucking entitlement at all to the public square is the opposite of killing it. When you consider the ACLU’s billionaire sponsors, the career trajectory of its staff people and its star attorneys, it is entirely realistic to view it as akin to NGOs in other countries, which act as pass-throughs for finance capital to nazis and other riff raff to suppress factions and movements inimical to its interests. Therefore, regardless of how individual members and staffers see themselves, it is realistic to regard the organization and its champions as objectively fascist, and treat them accordingly.

18 Responses to Boycott the @ACLU